Wow. I still can’t believe that I had a chance to see the McDades at the Abbey Pub, a well known Chicago institution. And that my husband David and I got to see them gratis, a fact that makes me absurdly grateful and humble. Hell, this blogging gig is pretty cool if people contact you out of the blue and give you free stuff and invite you to all the best parties.

Okay, enough about that, I’m a mere amoeba on the Great Evolutionary Chain of Blogging Being.

The thing I REALLY can’t believe that there were only about 10 people at the show. I feel bad about this, because that means that at least 20% of the crowd was there for free. So the next day, I went to the The McDades – Music website and bought their latest CD, Bloom. No, I could have downloaded it from iTunes for less, or I could have gone to Borders and rooted around in the Celtic/World Music bins until I found it, but no. I freaking felt compelled to pay Canadian funds and Canadian shipping, because I felt terrible for the band and for their mom, who was nice enough to contact me in the first place.

Danielle, if you’re reading this, the kids look great and they’re eating right. You raised ’em right; they’re very friendly and polite and put on an awesome, high-energy show. As it happens, I know a little about what it’s like to book a musical act and try to promote a show, and how agonizing it is to work like hell to get the word out and have so few people show up at the door that you’re short on paying the musicians.

God. I admire the McDades like hell for putting on such a terrific, high energy, but necessarily intimate show. I wonder why WXRT wasn’t part of the deal? They played at their stage two years ago, after all.

Here’s a set list, as I took it down on my iPhone on the little yellow-notepad thingy
(I am such a geek).

Below are the tracklists from the first and second CDs. I was fairly close on some of them, but woefully sketchy on detail on others. The song I blogged about before turns out to be Dance of the Seven Veils, which you can listen to at the McDades CD page. I think it was paired with Silver Platter before, too. This is lush, Balkanized Afro-Celtic Pan-Galactic goodness.

Whut? Sorry, wuz tranzed out danzin in mai chare. It really does make you want to go through drawers looking for diaphanous scarves.

::twenty minutes go by while Ginny hits “play” on all the tunes on the Bloom CD page::

Given my experience with their “unnamed tunes,” you can expect “B flat from Banff” on their next album – it was still very simple and Celtic, but I bet by the time they get done with it, it’ll be amazing.

BUY THIS CD. Then scroll down and BUY THE OTHER ONE. 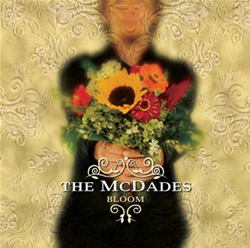 The Abbey Pub is an amazing place – the back hall is papered with old concert posters. A friend from work saw the Yardbirds there (in a later incarnation, with only two original members left). The large room is styled “The East Stage” and it does have a rather raffishly monastic feel. My online chum Prior Aelred would love it.

A nifty site that aggregates online radio, including some of my favorites, and scrobbles to Last.fm. www.scrobblealong.com

I listen to a LOT of music via Internet radio streams, and until August, I used to be able to put a nice list of “Listening” tracks on my various blogs. That was courtesy of Last.fm, which used to be the main place people could gather or “scrobble” their personal music libraries as they listened to iTunes or CDs on their computers or listened to radio stations online that provided the right kind of track medadata. Continue reading →

One thought on “The McDades at the Abbey Pub: 22APR08”