The Anglican Communion | The high price of togetherness | Economist.com

On the brighter side from the Communionâ€™s viewpoint, some Americans who went to Lambeth do now have a better sense of the social and political constraints on bishops in traditional societies. One African bishop recalls that after news reached his country of the gay-friendly stance of Americaâ€™s bishops, a senior Muslim asked him, in bewilderment, whether he too had ceased to be Christian. â€œI came to understand as never before that there are places and cultures where it is not possible to discuss [homosexuality],â€ said Bishop Jeff Lee of Chicago.

Wow, my bishop gets quoted in The Economist. Yay, Bish! Your videologs rocked!

It’s hard to tell here, but the Episcopal church in Boothbay Harbor is brand new, and made in a very clean and updated “shingle” style on the outside. On the inside it’s a clean, fresh, open plan space with a sanctuary that has a high wooden ceiling supported by big, nautical-looking timbers along the sides. The people were really open and welcoming, too. I had a number of great conversations with people and did my best to wave the big alto flag. They didn’t have a choir, but I had introduced myself to the organized, Eleanor, who became my buddy for the day. She in turn introduced me to a number of people and got me all nametagged and signed in. They do a great job of welcoming solitary visitors at St Columba, they’re a great and highly motivated group of people, and they’ve formed a discernment committeed and are looking for permanent clergy. They hope to have someone in place by Easter 2009. Living in Maine isn’t for wimps, but these folks aren’t all wizened and crabbed up by life in a small, seasonal resort town; they’re a dynamic bunch of people.

Hope some clergy person in the future sees this and thinks “Huh, this looks like a good bunch.”

They have a church bell with a sally rope, they have a short aisle with chair seating and portable kneelers, but the altar is on a raised dais (although it’s a movable, hand-made piece, very beautiful). They do a nice clear liturgy, straight out of the Book of Common Prayer, but with thoughtful inclusions; for Pentecost today they did the Maasai Creed rather than have a bunch of people do the reading in lots of languages:

We believe in the one High God, who out of love created the beautiful world and everything good in it. He created Man and wanted Man to be happy in the world. God loves the world and every nation and tribe on the Earth. We have known this High God in darkness, and now we know Him in the light. God promised in the book of His word, the Bible, that He would save the world and all the nations and tribes.

We believe that God made good His promise by sending His Son, Jesus Christ, a man in the flesh, a Jew by tribe, born poor in a little village, who left His home and was always on safari doing good, curing people by the power of God, teaching about God and man, showing the meaning of religion is love. He was rejected by his people, tortured and nailed hands and feet to a cross, and died. He lay buried in the grave, but the hyenas did not touch him, and on the third day, He rose from the grave. He ascended to the skies. He is the Lord.

We believe that all our sins are forgiven through Him. All who have faith in Him must be sorry for their sins, be baptised in the Holy Spirit of God, live the rules of love and share the bread together in love, to announce the Good News to others until Jesus comes again. We are waiting for Him. He is alive. He lives. This we believe. Amen.

As it was Mother’s Day, there were special prayers and thanksgivings; I thought of my own mom now departed and David’s mom still kicking, and was glad I didn’t skip church just because we’re on vacation. I belted out my alto notes on the hymns and visited with a fellow alto who noted it was nice to have someone else to sing with.

I liked St Columba’s a lot and hope to return someday on a future trip. They don’t have a web page and boy, do they need one! But their diocesan page gives the gist. However, they do have an early service in the summer at 8AM that’s new this year – no music, so you’re on your way a bit earlier and quicker.

As it happens, I walked there – they were about 3/4 of a mile or so from our hotel, so after coffee and a roll at the little bakery with David, I decided to stump off and walk it, rather than take the car. It was a bit of a haul as I’m out of shape, but I’m glad I walked as I had plenty of time to think, enjoy the glorious spring sunshine, and look at the old houses and the yards bright with forsythia and tulips.

In the photo, you can see all the pine trees that surround the church on two sides; as I approached along the road, I was greeted cheerfully by a man walking amongst the trees. Turns out he was the “outside greeter,” and he evidently took his job seriously. The “inside greeter” set me up with bulletin and such.

One lady wore an extraordinary crimson hat trimmed with crimson feathers; she laughed as she told me Pentecost was the only day she could wear it. Lots of others were wearing bright red jackets, and there were red balloons everywhere, including one escapee that broke free the bonds of Earth (or at least its ribbon became detached from one of the seats) and floated up into the rafterless upper reaches of the boat-shaped nave. The interim priest (kind of a semi-permanent one named Suzanne) noted in her sermon that it had exceeded expectations and compared it to Eldad and/or Medad. Had to look it up to figure out the context as I was woolgathering during the Old Testament reading.

After staying for delicious snacks and wonderful coffee – served from pump pots with real half-and-half, I walked back to the hotel. No speaking in foreign languages, no tongues of fire overhead, but felt plenty moved by the experience.

Although I could use some healing for my feet, they’re kind of achy these days…. 😉

Father Paul pulled out a very beautiful old Pete Seeger Custom banjo and sang a few lines of “Plastic Jesus” today in church; he’d have had a sing-along going if he’d thought to print out the lyrics, and as it was a lot of people at the early service knew the song and helped him remember the middle section.

I told him about a terrific interview my husband David and I heard on Bob Edwards Weekend, which airs on Sundays on WBEZ. I’m tracking down all the related links I can for it to send to Fr. Paul by email. Apparently, there was an amazing special on PBS that we missed, but maybe we can find it via TiVo. The associated blog post for the broadcast is here,

I could not find a simple link on BobEdwardsRadio.com to the interview, I had to subscribe to the podcast after tracking down the date, which was the weekend of February 23-24.

* Pete Seeger was banned from American commercial television for more than 17 years, after topping the pop charts and being blacklisted. Seeger wrote or co-wrote many of our most iconic folk songs. Now almost 90, Seeger is still performing and still writing. He’s publishing a new songbook this year and the PBS program American Masters pays tribute on February 27th with Pete Seeger: The Power of Song.

* Bob talks with composer James Newton Howard about his career and about his Oscar-nominated score for â€œMichael Clayton.â€

I got really annoyed last night as WordPress wasn’t behaving; it would not insert an image using the fancy schmancy image uploader. So I had David upgrade Image Manager, which is working again (but still has the annoying behavior it’s always had where the window has to be resized by hand).

And then today, there’s a new version of WordPress out, 2.5.1. Among security fixes, it also supposedly fixes the problem with the image uploader, and also adds to or upgrades the visual editor. So it’s time to test this with a few images from my cameraphone.Â  And blather.

First up, an image that I’ll upload with the fancy-schmancy image uploader, which uses the latest version of Flash/Shockwave to work, apparently…

When I arrived at church Sunday, there were rocks out in the front entrance. A few rocks in the gathering space. Rocks at the Mary shrine.

Next up, an image uploaded with the Image Manager plugin, invoked from the HTML view…

When I got in the sanctuary, there were rocks in the seats. Rocks in front of the organ. Rocks tucked in the corners of “choir jail” and under the kneeler bar. 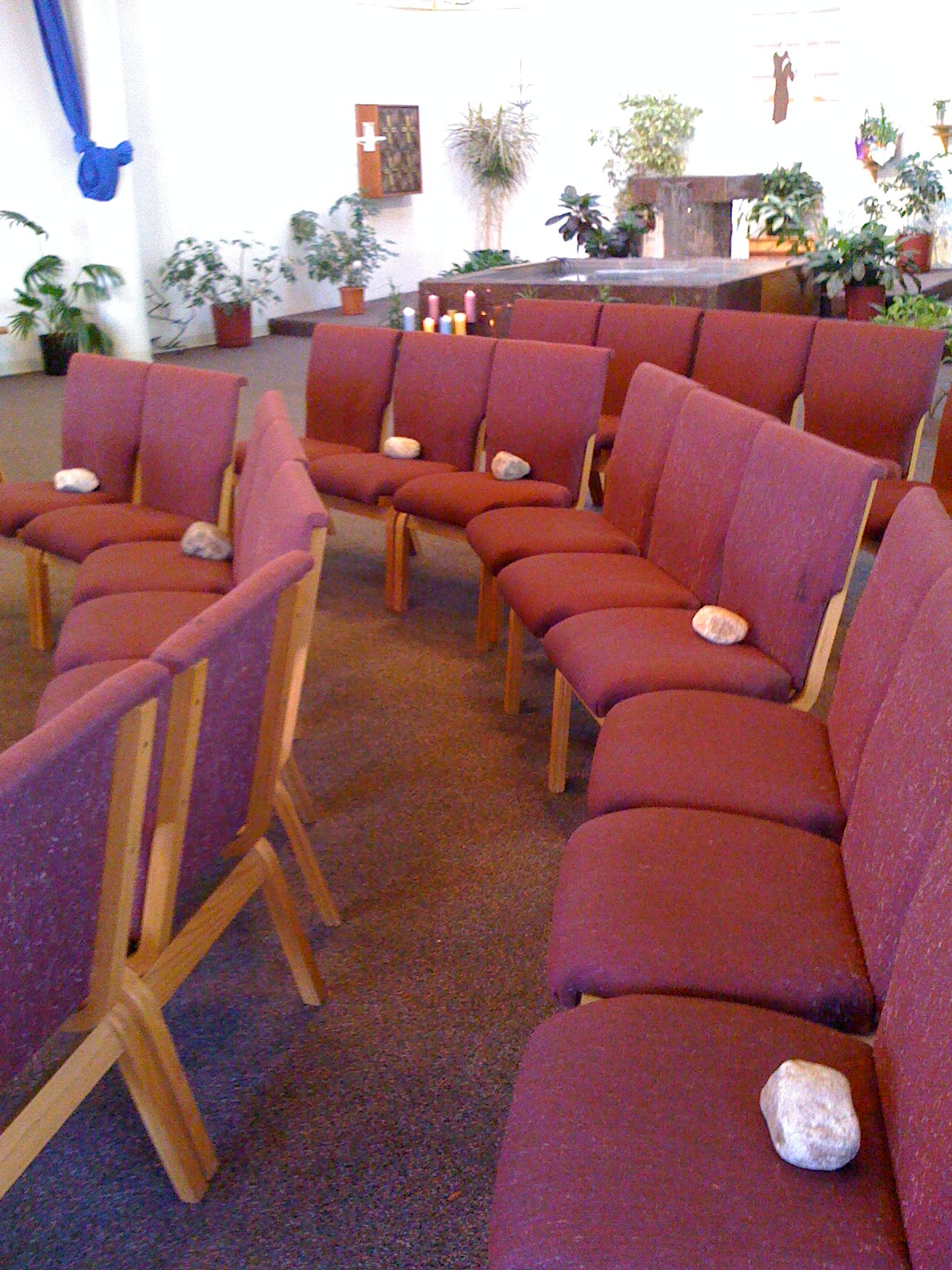 And finally, uploaded using the newly-visible button for Image Manager on the Visual Editor view…

Rocks in front of the altar. We’d been warned in the e-bulletin to expect rocks by Fr. Steve. 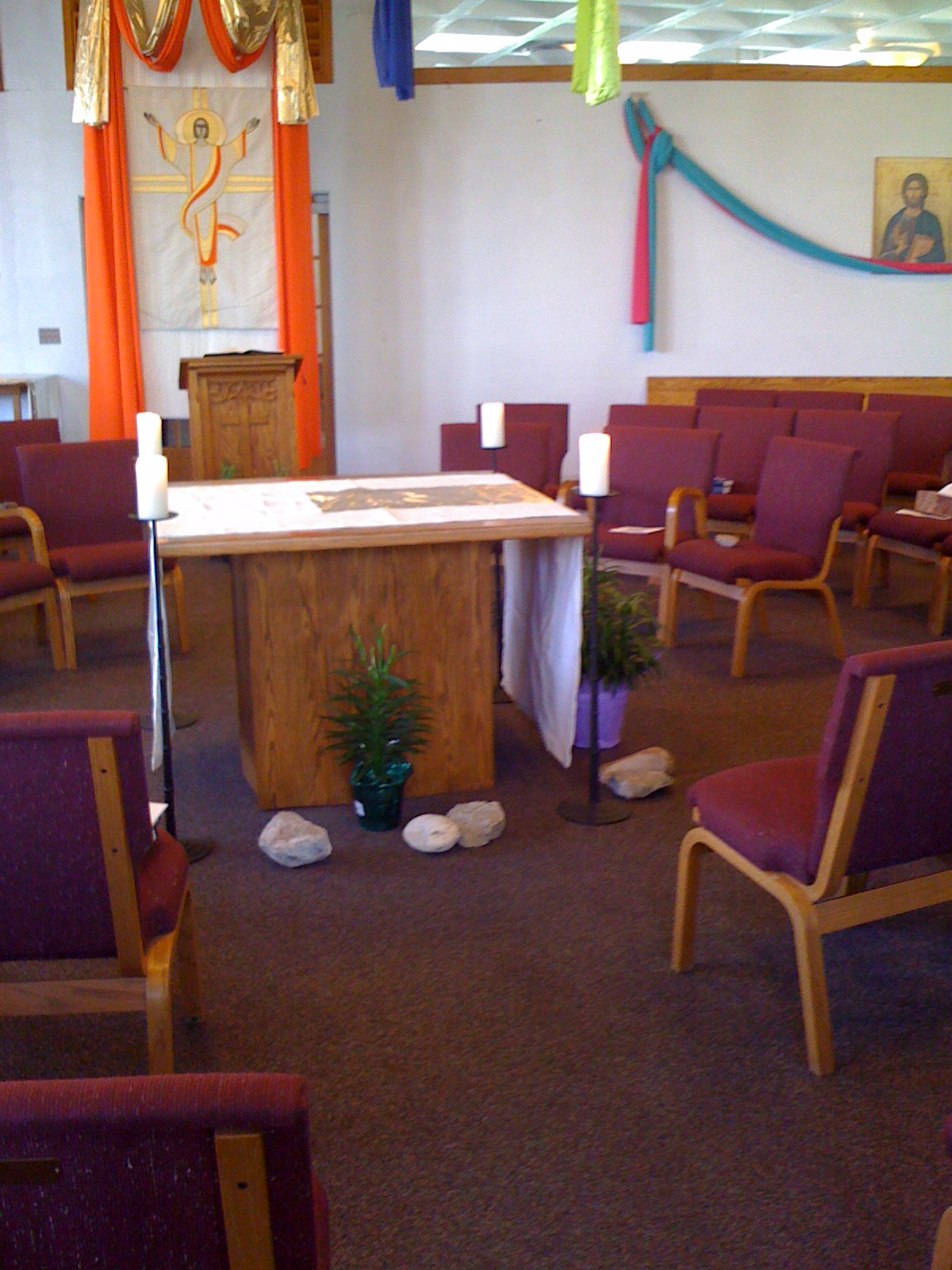 It turns out there was a point to it all – the readings all had to do with rocks or stones, and Peter, the rock upon whom the whole church is built, figured prominently in the Gospel. Steve enlarged on his theme by lugging in several hundred pounds of glacial boulders, which used to make up the base of the altar at the old Holy Innocents building. They were selected by the men of the church 40 years ago up in Wisconsin and hauled down to Hoffman Estates as an act of faith. When we disassembled the altar, we transported them all to the new building with the intention of rebuilding the altar anew – this time, it’ll become an outdoor altar (the top is solid slate). Steve hopes that we’ll select the stones and help to place them (men and women this time) as it’s rebuilt. We’re looking forward to the time when we can be outside for services when the weather is good. There was an outdoor altar at St Columba, rarely used. We hope this one will get used often in the summer, when it’s too hot to be inside.

So okay, Fr. Steve doesn’t have rocks in his head.

As for the image uploads, for some reason all three were sideways at first, but after opening them in Photoshop, they were vertically aligned… but still sideways when selecting. So I had to go back to Photoshop, rotate them to the right, then back to the left, and then somehow they were magically aligned (I never figured out where in Photoshop you “file/save” now).