In December, 2014 I was diagnosed with Type II diabetes, and will be riding in Tour de Cure Chicago on Team Red again this year to raise money for research and to help STOP DIABETES. Why? because diabetes sucks! For the second year running, as a person living with diabetes I wear the Red Rider jersey for training and on the day of the ride.

This year, if I raise $1000 by January 1, 2016, I will commit to ride 65 miles on the road, instead of the 40 mile ride on the trail. I’m not currently comfortable as a road rider and I need all the support and commitment I can get.

Or if you visit this site, your location will be tracked on a little map before it re-directs you to my ADA page.

We need the Cure – help Team Red Chicagoland reach our goal by July 15 and relative normality will be restored.

These photos are my journey with #Diabetes since I was diagnosed in December 2015. These are all the photos connected with living with #diabetes and learning to control it with diet and exercise.

I was already registered to ride in the American Diabetes Association's Tour de Cure charity ride, but then my diagnosis meant that I had become a Red Rider. Through friends in the Chicago ADA office, I got the jersey and started riding my old bike on an indoor trainer. The fundraising season started with the #TourdeCure Kickoff in March.

My nephew +Joshua Gibbs rode with me and +Barb Pohl on the 40 mile route of the recent Tour de Cure Chicagoland charity ride on Sunday 15JUN15. We're all on +Team RED Chicago together. If you donate to Josh's Tour de Cure page via Facebook or G+, he'll #Joshify your photos, too.

I hope my other teammates don't get infected. 😉 The #ArmyofJosh is irresistible! He uses an app called Juxtaposer to insert his picture, which was taken at a family dinner when we gave him the Tour jersey and cycling cap. He rocks that look, and raised more than a thousand dollars in a week after all his friends donated money just to see what he'd do to their pictures.

See re-direct link to my fundraising page at http://gplus.ridewithginny.com

My cover picture is #Joshified until further notice! PLZ HALP! 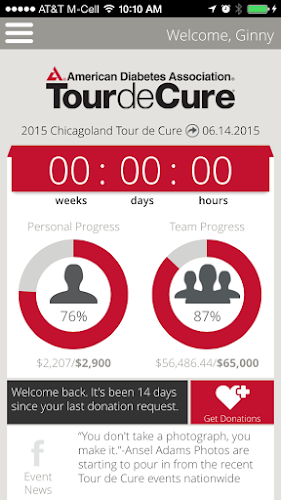 It’s a numbers game, and currently I’m on the winning side. My first A1C (long-term average blood glucose) came in at 5.8, down from 6.6 when I was diagnosed in December.

So that’s great, right? Yes, and despite the claims medical hucksters who’ll sell you a cure in a kit, I still have diabetes. It’s just well-controlled at the moment. I’m lucky that at this point it’s not advanced farther.

You can help me achieve that goal by visiting http://www.ridewithginny.com (checks cheerfully accepted if you ask for my address).

My longest ride so far is about 20 miles but bad weather on the weekends has cut into my training, though I’ve gotten in evening rides during the week (10 miles last night, partly with Vince Patrizi). I should be able to finish on the day, but I’d still like to log a 30 or 35 mile ride first.

Still, it’s been a long process getting to this point. My numbers are good; do you know yours?

It can be hard to keep track of the carbs you consume, yet it's got to be done if you're trying to regulate your blood sugar through diet (and exercise).

It's even harder when the sugar carbs are hidden or part of another ingredient that can be added mindlessly, like teriyaki sauce, hoisin sauce, or flavored coffee creamer.

If you're aware of the extra carbs in that lemonade, and balance them with lower-carb choices throughout your day, you can keep yourself pretty well-regulated.

But if you're diabetic and don't care, or assume "the drugs will fix it," or are trying to commit slow suicide, by all means have that delicious full rack of ribs dripping with thick BBQ sauce. And have a couple of glasses of lemonade and a side of cornbread while you're at it.

This anecdote is based on the experience of watching a family member make poor food choices, over and over, at shared meals. It's another reason my husband and I ride in #TourdeCure.

7 normal snacks with a crazy amount of sugar
Experts recommend limiting your added sweetener to six teaspoons per day. Here’s what that looks like.

Something interesting seems to have happened.

I’ve caught the fitness bug. Either that, or Bug has gotten into fitness (my dad’s nickname for me was either Bugginia or Bug).

I spent all of last spring and part of the summer not riding the bike I bought, which was a fairly decent women’s step-through that wasn’t quite the right fit or size for me. I went for a few rides, and made it around the 20 mile course for Tour de Cure last year, and I liked it all right, but never felt very comfortable on it. Also, I wished I had bought something lighter and had spent more time test riding and trying different things – I had this thought in my head that I didn’t want to awkwardly lay the bike halfway over to get my leg over the seat (never having been graceful) on my previous bike, which was a mountain bike with nobbly tires.

Unlike David, I didn’t go out of my way to ride my bike, and I didn’t plan travel around it (on vacation in Maui last year, he rented a very nice road bike for the 2 weeks and raved about it, but I’m not ready to be a road cyclist).

So then in December when I was diagnosed with diabetes, it was like running into an ice-cold wall of wake-up call. Although I was eating fairly well (following David’s low-carb diet), I was overweight, out of shape, and having to deal with a chronic disease that I was supposed to regulate with diet and exercise.

I still haven’t been to the nutritional class for newly-hatched diabetics, but I attended a 4 or 6 week seminar with David when he was diagnosed that was run by the local hospital, and I’ve been through my own very quick rundown with the nurse-nutritionist at my doctor’s office. The whole thing was a blur, but I came away from my “Congratulations, you’re diabetic” consult feeling slightly underwhelmed by the information I was getting.

Fortunately, with David being so involved with Tour de Cure Chicago (team captain of Team Red, is a member of at least one committee and is well-known in the offices of the American Diabetes Association in Chicago), I pretty much had the gist of what it means to to have diabetes, and have it be “well-controlled.” We’re lucky, neither of us currently have to take medication for it, although many, many of the people we know through the various ADA fundraiser and educational events deal with insulin, oral medication, insulin pumps,and more.

As far as being “well-controlled,” which is keeping one’s daily blood glucose readings within a healthy range, I’m doing all right. I had already decided to do the Tour de Cure and ride 40 miles, and had David set me up with a custom web page that re-directs to my Tour de Cure fundraising page (which has an impossible URL as far as remembering it, reposting it, etc.).

During most of the long, cold, dark winter, I was riding my old bike, set up on a training rig in the spare bedroom. David hooked sensors up and set me up with fitness apps and other gadgets (such as a Vivofit that’s linked to Garmin and also My Fitness Pal). I rode for about 20-30 minutes at a time, every few days. It was boring, uncomfortable, and not that pleasant. But I was getting some benefit and my weight dropped, and my blood glucose kept dropping from the rather high 140s-160s to a more reasonable 110-115. And then it kept on dropping.

So then David started talking about getting me a new bike; lighter, better fit, and so on. I came around to the idea of lifting my leg up and back to get it over the seat again. We talked to a guy David trusts at our local bike shop, Brad at Bike Connection. I looked at a few bikes, but one Brad sized me on had felt right. We made plans to go back and do some real test rides at a couple of places.

Meanwhile, I’d been out on the old bike on a few rides around the neighborhood, and hey, my blood glucose really started to drop. It was good to get the old bike off the trainer, and it wasn’t as uncomfortable as it was on the rig, but it still wasn’t what I needed.

So last Saturday we rode around, and the bike that still felt best AND rode best was Veda.

Since then I’ve ridden every day, even today, a mid-week day (there was a regular Meetup ride at Busse Woods). David got me a refurbished Garmin bike computer, because using my iPhone and some apps with an ANT adapter wasn’t cutting it. And my blood glucose, weirdly, has stabilized in the 80’s-90s. I know, WEIRD, right?

Here’s my Strava route from today – it was oddly cool and warm at the same time. There’s a big booming wind coming from the west tonight and although the temperature read 73 degrees, it felt a lot cooler than that, especially when the wind came over the still-slushy lakes.

This ride from the day before, my first long ride on Veda, ended abruptly when the battery in the iPhone died. I kept riding and went back to Holy Moly, where I’d left the car park (it was a post-church ride).

My mileage is NOT impressive compared to some of David’s friends whose Strava postings are pretty intense, but it’s good to get outside and do something and I’m seeing so much benefit from it already.

Still have to tweak some things as far as the bike is concerned (sometimes called “dialing it in” ) but I’m happy to have caught the fitness bug while it can still do me a lot of good.

Please checkout my fundraising page for the #AmericanDiabetesAssociation and help me #StopDiabetes.

I absolutely love the fact that I can take something I enjoy immensely and turn it into something that helps others and helps myself.Â  I obviously enjoy #cycling, and the exercise helps me keep my #diabetes under control, and my involvement with +Tour de Cure helps others by raising money for education, research, and advocacy.

Thanks to a lot of friends & family, including Scott, David, Katie, my brother Dan, and his girlfriend Tami, I'm almost to 80% of my goal of $5000 for the Tour de Cure.

You can help me get to 100% by making a tax deductible donation at http://gp80.diabetessucks.net.

You can see where the people who care enough about diabetes are from by visiting my donation map at http://gp80.diabetessucks.net/mapdonations.php.ï»¿