Let’s see… it’s Wednesday, so I’ve finally recovered from the barrage of total neatorama that occured last weekend. My husband David’s birthday luau, and some HTML and CSS geekery, and then on Sunday evening, we actually MADE IT TO WOOTSTOCK V2.2 IN CHICAGO!!!!!!!11!! (my bangs, they go to 11).

If you’ve spent any time reading here, you know we’re really big fans of going to Hawaii, and we’ve been to a bunch of luaus and other Hawaiian-type dinner shows over the years. We’ve even gone with friends, and done goofy things with them just because we were in Hawaii.

But Friday’s dinner at a local strip-mall based eatery called the Tiki Terrace was one of the best times we’ve had in years – at least, without having to spend 6 hours stuffed into Economy Minus and suffer jet leg. While we were waiting for the dinner-and-a-show thing to start, we were discussing some of our adventures from long ago, when we totally BURIED STEVE and would have left him there if we could have.Â  Because we’d still be there if we had.

If Only Steve Had Stayed Buried

That’s our friend Earle on the left, and David’s best friend Steve in the middle,Â  who organized the evening at Tiki Terrace. Earle’s wife Sandy couldn’t be there on Friday or we almost would have had the old band together (we went with 5 friends in 2004). 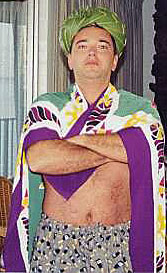 Earle also enjoys Hawaiian culture and so I was pretty sure he was enjoying the ambiance at the Tiki Terrace.

Anyway, it was hella fun, because there was a special guest at the show. I started to get excited, thinking it was one of the performers we might have seen on our visits to the islands, but it turned out to be vastly better than that. After all, this is a place that features ginormous Easter Island statues and superior tiki decor, all in a long narrow dining room stuck in a suburban strip mall. My sister-in-law Gloria and I discussed the origins of Tiki culture, which we decided were probably rooted in the collective conciousness of thousands of WWII GIs coming home with island crap and deciding to start a bar, while we waited for the special guest to come out.

Tiki Elvis wonders if you are lonely tonight

Yes! It’s Tiki Elvis! He sings for you! Admit it, you were expecting maybe Iz? Or Don Ho?

Sure, it’s kitschy â€” very kitschy, but also cozy and friendly and fun. They’re open 7 days a week, but the hula show is only on Friday and Saturday nights. It’s like a one-night vacation, and we’re probably going to go back when the mood strikes us (reservations are probably essential for show nights).

They also have some very good hula dancers, plus the obligatory host who sings a little, jokes a little, and dances a little &mdash; and the bartender will come out and sing something if everybody claps hard enough (he’s very good,Â  but any resemblance to Tiki Elvis is strictly coininkidental).

The surprising thing is that everybody in the front of house is pretty young – even the host, who sported tailbone-length hair and some serious tattoos when he came out to do a New Zealand men’s haka with the other male dancer. They were both very impressive, and actually I got a little irritated at the tableful of tween girls who were shrieking and giggling at the shirtless tattooed guys wearing nothing but muscles and tightly knotted pareus.

Guess I could hardly blame them, it was clearly their first adult-type birthday outing (they were wearing lots of that Libby Lu girly-girly makeup stuff).

The service is friendly, the crowd is clearly there to have a good time (there was one very large party celebrating a big birthday) and the menu is pretty reasonable (it’s all prix-fixe luau food, but appetizers and desserts are extra).

The only problem we had was that we finished dinner a little too close to the beginning of the show, and our dessert orders couldn’t come out until long after the show had finished, so we did wait what seemed like a really long time for our tropical desserts. Our waitress was cute and pretty attentive, but she did kind of disappear when we were wondering if she’d forgotten about the sweets.

David was adamant about not going up on stage for any hula shenanigans so we all maintained radio silence when the time came for the obligatory “let’s get all the birthday people up here and make them do the hula” portion of the evening. Honestly, the guys they DID get up there did a fine job of goofing around, and the stage was kind of small anyway.

So once it was over, we all headed for home, wearing our luau finery, and it looks like we’ll have to make a group trip of it this February for Steve’s 50th… oh, dear.

But that’s not all the awesome! There’s even moar!

Okay, not that awesome actually, but it’s been kind of an issue for some weeks/months/years that the design we went with after the merger was not what we had discussed when I stepped back from being a webmistress and just maintained the church blog (more or less).

Actually, it got to be kind of depressing how I could not seem to get a link to the blog from the church main page, because the previous webmaster had hosted it through Yahoo and kept losing the link every time he updated some news item on the front page. I had given up asking him to put a real, premanent link on there… but he was very busy with seminary so it wasn’t a very big priority.

Anyway, he’s on track towards ordination as a deacon now and had to hand off the web duties, and there was no one else at church with ANY kind of ability to do a web page, so I was asked to take it on. I agreed, as long as we could completely re-do the site, and host it, and convert it over to a WordPress installation much as I had done with the old Holy Innocents site. For one thing, I wanted to be able to do most of the rejiggering, with David’s help, and not have to do it with Front Page, which I had not been crazy about before.

And so here it is although it’s really just a fancy mockup of what I hope to do with it – the main page will probably get a major makeover as I re-learn the stuff I want to do with images in GIMP and catch up on what CSS can do – for now it’s arranged with simple tables (please don’t view source, eek). I did at least manage to produce the background images and banner image (the photo strip isn’t my work, it’s one element I brought over from the previous layout).

There were technical problems and delays getting the domain registration transfered from the previous hosting service, and frankly it took much too long because of it being too complicated… but the middle of last week, it was finalized at last, and I had been fooling with a highly customizable blog template, creating pages to put the content in, and messing with what became the static front page.

Saturday night it was almost ready to “cut over,” and I was messing around on Facebook uploading some photos I’d found on my hard drive when I got an IM from the former webmaster, chiding me about the lateness of the hour and reminding me I had church in the morning. So that turned out to be fun and I’m glad for him that he’s finally on his way toward ordination, after kind of being stuck in the process while at St Nick’s. What with one thing and another, we didn’t actually cut everything over from old to new until last night, but it was essentially done Saturday except for minor styling changes.

So yeah, talked to people at church, got the final “Oh, Ginny, I’d like you to” aesthetic tweaks from Father Steve, and then it was time to go home and prepare for what became THE MOST AWESOME AWESOMENESS that occured on Sunday night, ever, in the history of the world.

David had his iPhone and his brand new Canon EOS 7D, the one with the really good video (used in a recent commercial). I had my iPhone and an excessive amount of screaming w00tiness.

Both are in evidence in the following:

I can be heard laughing in the background saying “eBay!” at one point. But mostly it’s Mr Savage’s party piece (with rather impressive hardware).

There was just SO MUCH w00ty goodness, so many funny people and cartoonists and musicians and people doing readings from books and talking about losing their Rocky Horror virginity… great overview here, inÂ  fact, as my memory is just one happy shouty jumble.

I took a few pictures with the iPhone and tweeted a HELL of a lot:

Sign in the parking garage we eventually found right around the back of the Park West venue. Duh. $20 well spent.

Ceiling Cat was the default desktop on the media screens when they weren’t playing cartoons, Moments with Wil, or showing pictures of destitute Stormtroopers panhandling. Some of the comedy came from minor glitches with volume or opening the wrong file. Everything got a big laugh, because everything was funny. It was the kind of instant geek nationhood that springs up at a good convention.

mai tweets, let me show you them

Here’s a great picture of Peter Sagal that David took – in character as a henchman who dreams of being the hero for once.

WWDTM's Peter Sagal, as The Henchman

Thanks to @jernst, there’s audio, and it’s all shareable and whatnot.Â  You must listen! It’s too big to upload here.

There’s all kinds of photos on Flickr and Twitter, and there’s stuff from Minneapolis, the next night in the tour, all over everywhere.

Monday at work was…. painful as we didn’t get home until about 130am. The show is billed as “3 Hours of Geeks and Music” but actually it’s closer to 4 or 5 (depending on how much digressing is going on, and how long it takes to get through the last song).

Give you an idea; during the show, a recurring them was “but I digress.” So David registered a domain, www.butidigress.net. Don’t know what he’ll do with it – maybe collect lists of cover bands and tribute bands (hard to explain why that would be funny, watch some of the videos).

Yeah. I can’t wait until the next version comes out.

This is one of several recipe cards Mom wrote up to pass along the secret of her famous Rum Balls, which she developed with her best friend, Veda West. .The story of how this recipe was created involved a big … Continue reading →

We brought 2 pies to the family Thanksgiving gathering; we mingled, caught up with family members, got a new recipe (actually more of an ingredient list) and listened to all the chatter. It’s always a good time lying in wait … Continue reading →