Remember the family victimized when the local KKK burned a cross on their lawn, but they won a lawsuit? President Reagan dropped by to visit them.

Funny thing, they never did collect on the settlement. The leader of the local KKK disappeared.

Many years later, he turned up as a Catholic priest, and NO ONE wants to talk about him. Not his diocese, not his former diocese, not current and former parishioners, no one. The Washington Post did find a few people willing to talk about him, like old schoolmates who were shocked by his transformation from racist skinhead to priest.

He still had some anger issues, though. He seemed to work through them by protesting at abortion clinics, and by “teaching history.”

Last week, some parishioners were struggling to reconcile the priest they knew with his violent past and failure over decades to make amends to his victims, actions the diocese has now offered to broker and says Aitcheson is willing to do.

Maybe the Church needs to stop protecting racists. It looks a little too much like when they move pedohiles around and protect them, too.

If this had gone through last summer, would it have been a deal breaker for the Trumpist base?

Nevertheless, the details of the deal, which have not previously been disclosed, provide evidence that Trumpâ€™s business was actively pursuing significant commercial interests in Russia at the same time he was campaigning to be president â€” and in a position to determine U.S.-Russia relations. The new details from the emails, which are scheduled to be turned over to congressional investigators soon, also point to the likelihood of additional contacts between Russia-connected individuals and Trump associates during his presidential bid.

White House officials declined to comment for this report.

Source: Trumpâ€™s business sought deal on a Trump Tower in Moscow while he ran for president – The Washington Post

Resident Drumpf may see this item in the Washington Post, but it’s unlikely as his news reading is “curated” for him so that he sees stories that are positive (and mostly about him).

A disturbing image was found on a golf course in Minnesota: https://t.co/m7dnYQ2sMZ pic.twitter.com/xMXHVh0gki

However, since it’s on a golf course, he may feel moved, but it’s not as if it happened at one of his own golf properties, is it?

This may be instructive (though it probably won’t be) to a certain cheddar-hued gesticulator.

In 1982, President Reagan read about a black family in College Park, MD that had just won a civil suit against a local KKK member who had burned a cross on the lawn of their home. He was moved, and insisted on meeting the Butler family. He asked staff to arrange it, and they were contacted at their work to give advance notice (both husband and wife worked for the government printing office). After completing some work and taking some meetings, he helicoptered over after 4pm to visit their home with his wife Nancy.

It was a cordial visit, that ended with hugs and good wishes. It was symbolic, but also warmly personal. The College Park family not only won their suit (it’s unclear if they ever got the money awarded), but the President of the United States dropped by to personally offer his support. It was a remarkable moment.

I never cared for Reagan, but I never doubted that he was President, though in his later years I had my doubts about his mental capacity. He was “the photo opportunity President,” and I remember thinking that he never missed a chance to be part of a “feel good” story.

But he made this happen, and he reached out to the Butlers in a way that seems, in hindsight, heartfelt.

Source: The day President Reagan comforted a black family who had a KKK cross burned on their lawn – The Washington Post

They’re so lucky it wasn’t much, much worse in Charlottesville. It had the potential to be a bloodbath. The lines of communication were poor between the various protest groups and the Charlottesville authorities tasked with keeping people safe.

But it nearly came unstuck. At the moment this man aimed his gun at a counter-protester using an improvised flamethrower, the C’vill police were up the street to the left and behind barricades. They were out of position for keeping the two groups of protestors separate. 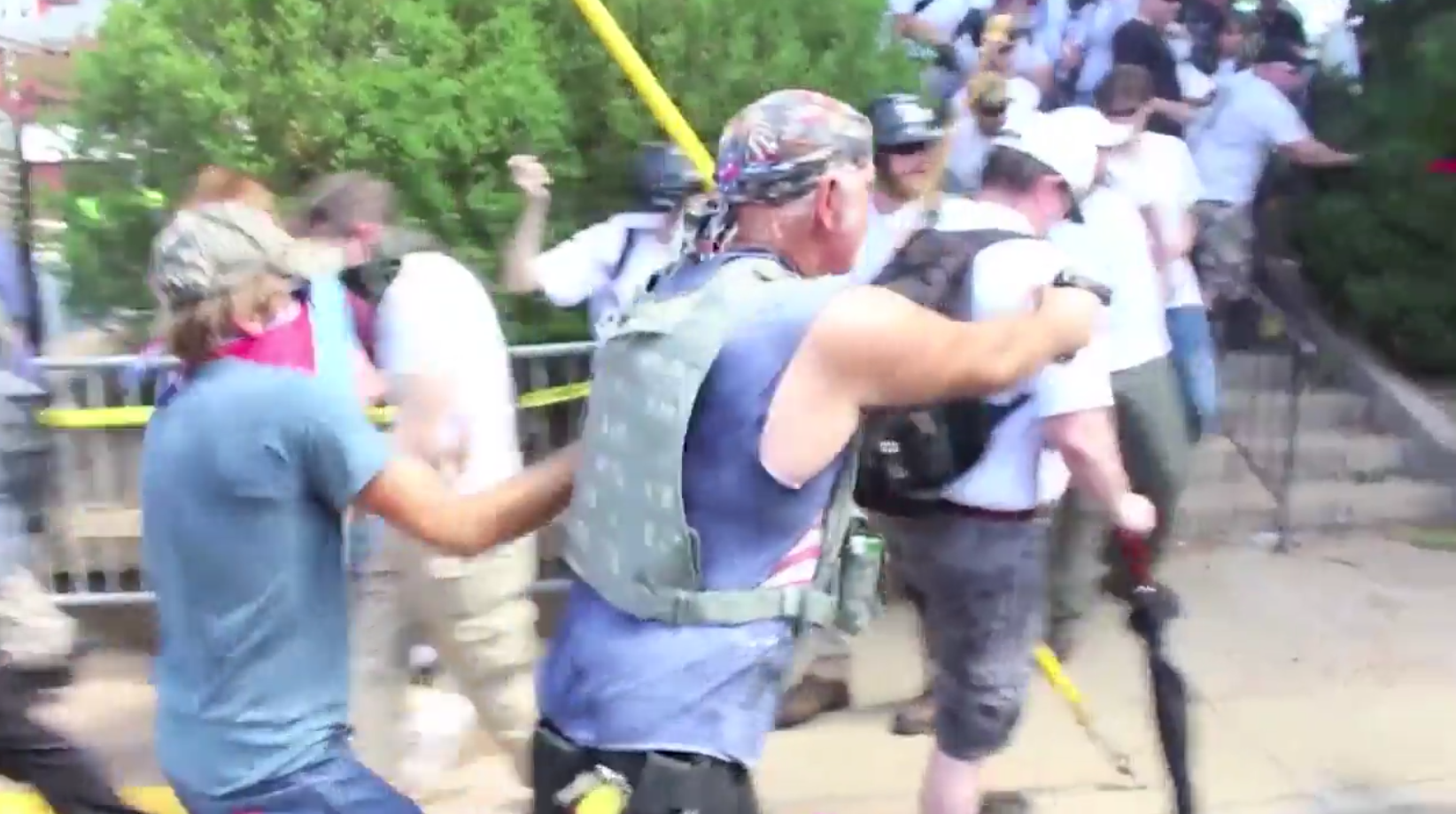 This man has been identified and arrested. Fortunately, his safety was on the first time he aimed; his re-aimed shot went into the bushes.

The authorities had some challenges, as some of the militia-style rightwing protestors showed up in very credible-looking body armor, including some unit patches (but no visible name patches). One official mistook them briefly for reinforcements, there to help maintain public safety. He was startled to realize they were not “the good guys.”

Arriving in Charlottesville, Virginia, for a rally planned by white nationalists earlier this month, Virginia’s top homeland security official nodded to a nearby group of men clad in camouflage and armed with semiautomatic rifles, believing they were soldiers in the state’s National Guard.

Then he did a double take.

“They’re not ours, are they?” said the official, Secretary of Public Safety Brian Moran, who described the exchange in an interview. “No, sir,” came a reply from his deputy in the passenger seat. “I don’t think they’re with us.” 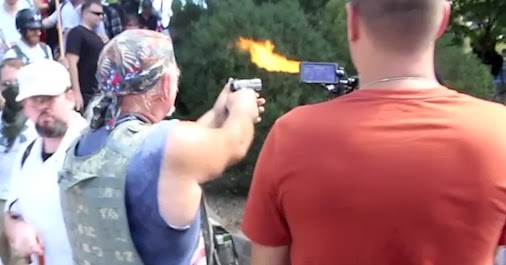 As White Nationalist in Charlottesville Fired, Police ‘Never Moved’ – The New York Times
Pleas for help and a safety plan were ignored at a rally that turned deadly on Aug. 12, participants said. Both sides feel betrayed by law enforcement.

Barcelona turns out in hundreds and thousands in a march of solidarity against terror and for tolerance. However, Catalonia still has an uneasy relationship with the rest of Spain. 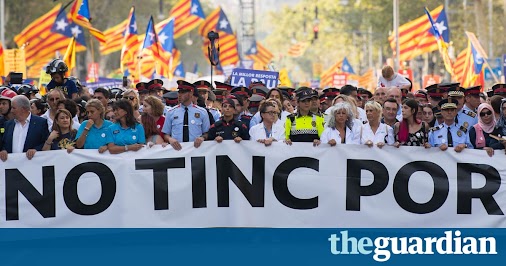 The ‘Money Fight’ in the Age of Trump

The image these men project is disturbing. The controversy that swirls around them is troubling. The culture that celebrates them is disgusting.

I can't wait until the ads and movie trailers stop. 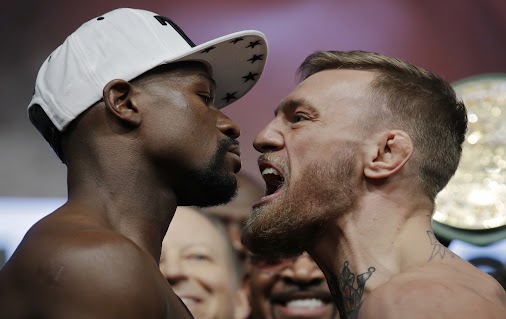 The ‘Money Fight’ in the Age of Trump
The McGregor/Mayweather fight is a stew of racism, sexism, homophobia, and economic injustice.

For the first time in forever, we will soosh tonight.