Damn, I laughed so hard at this, I might need a new chair. Via the ever-excellent Hullabaloo: 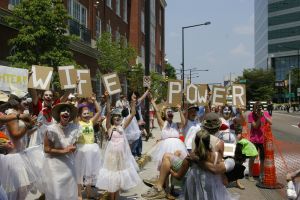 â€œWhite Power!â€ the Naziâ€™s angrily shouted once more, â€œWhite flowers?â€ the clowns cheers and threw white flowers in the air and danced about merrily.

â€œWhite Power!â€ the Naziâ€™s tried once again in a doomed and somewhat funny attempt to clarify their message, â€œohhhhhh!â€ the clowns yelled â€œTight Shower!â€ and held a solar shower in the air and all tried to crowd under to get clean as per the Klanâ€™s directions.

At this point several of the Naziâ€™s and Klan members began clutching their hearts as if they were about to have a heart attack. Their beady eyes bulged, and the veins in their tiny narrow foreheads beat in rage. One last time they screamed â€œWhite Power!â€

This… THIS is AWXZUM WINx6!!!1! with a side of kittenz! This is how to deal with any type of socio-religio-political bullying: by laughing at them until their heads explode. It’s just like that one episode of Classic Trek, except with even cheezier costumes.

How’s this for tags?

You first have to read this blog post by TV’s Wil Wheaton – he tells a great story about his relationship with Jonathan Frakes, and how important it is to find the family that laughs with you, not at you. … Continue reading →