As you might have guessed, it was based on domestic abuse. An ex-boyfriend shot a woman on her 22nd birthday at the place she worked, because it was one place and time where he knew how to find her. The family member that let slip to him where she was working will have to deal with their lapse in judgement. I hope the young woman survives, her family had been planning a surprise birthday party for her when they got the awful news that her stalker ex-boyfriend had shot her at work.

Apparently his parents are both cops, so the victim thought there was a good chance that any complaints she made about their son after she ended their abusive relationship wouldn't get much attention. 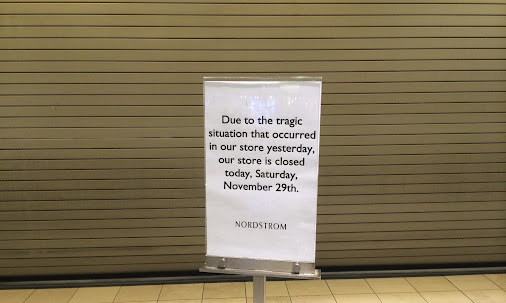 Family: Surprise birthday party was planned for Nordstrom shooting victim
Family of a woman shot by her ex-boyfriend while working at a Nordstrom store off North Michigan Avenue say she was shot on her 22nd birthday, before she could come home to a surprise birthday dinner after her Black Friday shift.