Yep, I had more on Chris Buttars that I found today. 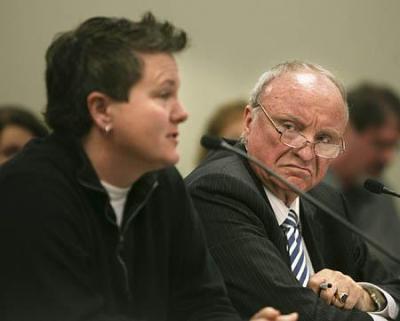 “Christensen said Amendment 3 deliberately outlaws synonyms or substitutes
that “approximate marriage.” And he alleged that registry supporters have “a
broader agenda” than securing health benefits or visitation rights – which
never have been threatened, according to SB267 backers.

Tell that to Cristy Gleave, a lesbian mother who told the committee she was
not immediately allowed to see her partner at LDS Hospital after a serious car
accident.

That did not sway Buttars, who equated the registry certificate with
marriage papers. But City Attorney Ed Rutan rejected the comparison, saying
there is “absolutely nothing” in the language that violates Utah’s marriage
law.”

The Salt Lake Trib’s letters to the editor and editorial pages exploded today after the latest Buttars debacle broke open, and several letters referred to the image above. Trib columnist Rebecca Walsh also attempted to find one voter in South Jordan who admitted voting for Buttars. No one did, and most people she encountered did not even know who he was. He’s supposed to be going on a mission (at his age! Probably hoping for a stake presidency someplace warm and exotic) and will not be running again
in 2008, thank God.

Yesterday’s “old Mormon bishop” letter was one of the most-read articles in the Trib. Right on again, bish!

“The undisguised fear, contempt and loathing on the good senator’s face is
shocking in its nakedness.”

“Salt Lake City residents did not elect Buttars to the Legislature. We did
elect Mayor Becker and the City Council, and we trust them to make decisions
for our community. Butt out, Sen. Buttars.”

“What a telling photo of Chris Buttars on the front page this morning
(“Becker’s registry sparks a squabble,” Tribune, Feb. 12). If there was ever a
picture of hateful intolerance that is it. “

And the caption contest/LOLbiggit extravaganza has started, too.

A blast from the past: audio of the debate on another Buttars-sponsored piece of nasty intolerance, including an impromptu speech during debate from State Sen. Scott McCoy, Utah’s only openly gay state senator. Buttars once publicly expressed surprise that “the gay?” got a committee appointment, and McCoy promptly registered a vanity license plate: “THEGAY.”

US beekeepers fear for their future – BBC News

American beekeepers are struggling to survive against cheap imports of foreign honey. — Read on www.bbc.com/news/business-53149367

So about six weeks ago, we were waiting for something good to happen. My husband David is in between bullet points on his resume – it’s set up like a very long leave of absence and we are fine, but … Continue reading →